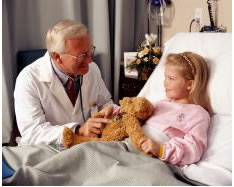 Children can get cancer in the same parts of the body as adults, but there are differences. Childhood cancers can occur suddenly, without early symptoms, and have a high rate of cure. The most common children's cancer is leukemia. Other cancers that affect children include brain tumors, lymphoma, and soft tissue sarcoma. Symptoms and treatment depend on the cancer type and how advanced it is. Treatment may include surgery, radiation and/or chemotherapy.